VERSUS: Is Undercover's React Over-Hyped or 2018's Best Colab?

There's been a whole lotta salt at SF HQ this week. Nike dropped their latest colab with Undercover’s Jun Takahashi and all but a lucky few copped a big fat L. While most of us dried our eyes, one of our writers seemed unfazed.

After days of prodding, we finally got a response: the Undercover x Nike React Element 87 colab was ‘mediocre’.

Our resident Takahashi fanboy regarded this as a provocation. Not wanting to spill any blood in the office (we’ve had enough of that lately), we decided to throw our two dogged writers into the digital gauntlet. Is the Undercover x Nike React Element 87 link up 2018’s ultimate colab? Or is it wildly overrated? Draw your sword, this one’s going right down to the bone. 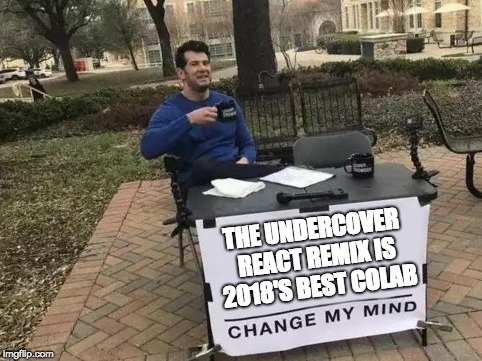 2018's best colab? Seriously? We're halfway through September and you are already willing to call it? I'm going to concede that the React Element 87 is most likely going to wind up as the best new shoe of 2018... but colabs are a whole 'nother story. What has Jun Takahashi done that elevates his colab so far above the OG? Mix up the colours? Slap his logo on the side?

No one would care about the 87 if Jun Takahashi’s name wasn't attached to it!!  The OG design has his fingerprints all over it.

We need the man from the ‘Tokyo Sex Pistols’ to inject some punk and get a little Sid Vicious in 2018. We need him to navigate the cooked moral compass of 2018.

I’m not gonna deny I want to see more of Takahashi's input at the Swoosh, but these are pretty weak.

A good colab is able to take the ordinary and make it extraordinary; to take the expected and present it in a unique way. This achieves none of that. It plays it safe in all but colour. And if we are to rate colab on the merits of its colourways alone, those colourways should be leaps and bounds ahead of the non-colab releases... and I don’t think these are. Hell, I’d argue that the OG 87 colourways are superior to Jun Takahashi’s creations. Let's be real ...

I don't mind the brown sole. Why not a waste-coloured sole? You seriously calling these weak???

If Takahashi wants to take out 'colab of the year' then he needs to do something more than drop an eye-catching colourway and slap his logo on it.

But the colab is important because Takahashi is important. He always has interesting ideas about exposing the culture and pushing it forward in different ways. He has strong philosophical ideas about rebellion/pacifism/moralism. Is anyone out there actually SAYING anything?

Are you really saying it takes 'strong philosophical ideas about rebellion/pacifism/moralism' to hit randomise on Nike ID?

Virgil Abloh routinely justifies his collaborations in such terms, but does that mean I'm going to give him 'colab of the year' for recycling 'The Ten'?

So Abloh is out for colab of the year?

Yeah, unless he does something radically different... devoid of quotation marks…

You should always judge a colab on what it sets out to achieve within the restrictions it's given. There’s so much Takahashi could have done with these – a simple change up of materials would have made all the difference. But whether it was Nike wanting to play it safe with the fledgling silhouette or entirely Takahashi’s choosing, these just don’t do enough to earn ‘best of the year’ honours in my eyes.

Whatever dude, my Reacts are in the mail; here's some tissues to dry your eyes.

Yeah, well you better hope you're not out of the office when they get delivered! But, seriously, in three month's time when it comes time to make our final 'best of the year' picks, I doubt these will even get a mention.

After putting the vote to you, the readers, your thoughts on Undercover's React colab are clear: this is not the colab of the year! 68 per cent of you decided that the colab was over-hyped, while a still-impressive 32 per cent believed it was the best colab we've seen in 2018.

In case you missed it, be sure to check out our last VERSUS debate, where we exchanged blows over the democratisation of Yeezy. Should everyone who wants Yeezys get Yeezys? Hit the link to find out our thoughts!

VERSUS: Did Travis Scott Upstage Kanye West in 2019?

VERSUS: Do We Need to Stop Complaining About Resellers? ...

VERSUS: Rock ‘em or Stock ‘em?